The DBL Sharks Sheffield clung to second place in the BBL, falling to 11-9 after a seventeen point loss to in-form Plymouth Raiders. The Sharks gave a debut to new signing Nick Madray but their forward line jinx continued with Captain Mike Tuck suffering a hand injury ahead of next week’s important televised clash against Leicester Riders.

A close first quarter opened the contest. Jarvelainen’s trey at 5-7 was soon matched by a perfect three from three from the line by Chris Alexander and Dirk Williams one-handed slam at 14-7 saw the Sharks cap a 9-0 run. Ubiaro turned things back Plymouth’s way as Madray took his Sharks bow with 1.17 left of the quarter but Wilcher’s free throws saw the Raiders in front by 18-22 after ten minutes play.

Donte Nicholas got involved in the low post at 20-29 as the Sharks called for time. Jarvelainen extended Plymouth’s lead to ten at 24-34 but soon picked up a third foul with 3.44 left in the half. Symptomatic of the Sharks problems was the same fate befalling the high-scoring Chris Alexander and three’s from Okiki and Wilcher gave the Raiders a 30-41 half time advantage.

Alexander began the third quarter but the Sharks stalled on offence. Jarvelainen hit a trey on the fade as the visitors lead went past twenty at 32-53. Twelve unanswered points soon extended that to 36-64 as Alexander picked up a fourth foul with 2.15 left of the stanza. 42-71 and a 12-30 third quarter signalled the end of the Sharks competitiveness in the game.

The Sharks took the final period by 24-12. Plymouth had already sealed the win but Rob Marsden showed he had the guts for the fight with six early points in the period. Sadly, Chris Alexander picked up his fifth final with 3.55 to play. Davide Martinez-Morrant, Nathaniel Montgomery and Marko Backovic all weighed in with points to bring the deficit within twenty but the damage had already been done as the Raiders ran out winners by 66-83.

On a tough night for the Sharks and with his partner-in-crime, Chris Alexander, forced into limited minutes, there was only one candidate. Dirk Williams poured in 22 points with 3 rebounds, 2 assists and 2 steals. An honourable mention should go to Rob Marsden, who again carried the forwards with 10 points and 11 rebounds in the face of Mike Tuck’s hand injury and the integration of Nick Madray, who showed promise in his understandably limited minutes on court.

Atiba Lyons spoke of the need to get the guys through this mini rough patch and back on track with a third of the season left to play. 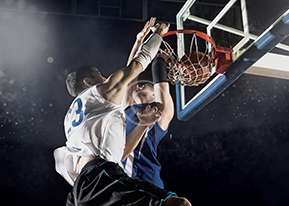 Sharks edged out in Cheshire thriller